SCULPTRA filler is a favorite for rejuvenating facial skin. SCULPTRA filler is like a liquid facelift working both by filling in lines and wrinkles and by stimulating the body to produce new collagen and underlying tissue, thereby creating a fuller, more youthful appearance. SCULPTRA injections are one of the most frequent procedures we perform at NorthStar. Clinician Dr. Berger has been performing the since 2001 and treated countless patients.

RADIESSE filler is injected below the surface of the skin in the area of fat loss. The consistency of Radiesse filler is that of a creamy substance that comes in a pre-filled syringe. The results of Radiesse treatment show an aesthetic improvement and provides an increase in cheek thickness in the treated area. Our experience of using Radiesse of less wide areas including correcting naso-labial folds, improving and lifting cheeks are appreciated and the visible results appear at the first treatment session, although a second Radiesse treatment may often be necessary at achieving best results. Radiesse filler will not correct the underlying cause of the facial lipoatrophy, but will improve appearance in the treated area.

BOTOX Cosmetic and BOTOX Injections are certainly not just for older age individuals but often younger men and women have taken advantage of the results one can achieve to maintain one's best facial and youthful appearance. BOTOX is injected into discrete facial muscles where they act locally to reduce muscle contractions that produce skin creases, either with facial animation or at rest. The patterns of BOTOX injections are tailored to fit each individual’s needs. If you are a man or women and think it's time to do something about those moderate to severe glabellar lines between your eye-brows, crows feet at the sides of one's eyes, and forehead lines, contact our Chicago BOTOX location to talk to us about injections so that you can become educated and pro-active about your appearance. 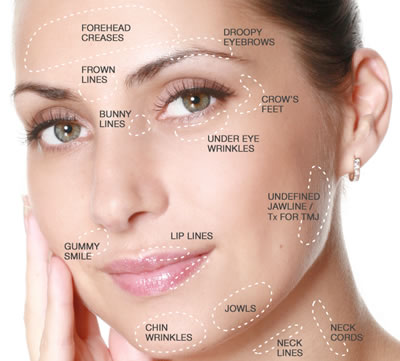 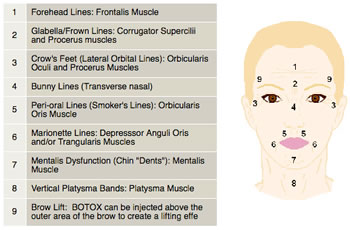 The purpose of this article is to provide an introduction and educational brief on the treatment with Sculptra, a user friendly and ideal product. It has been widely known to correct the severe stigmatizing facial conditions occurring in persons with HIV infection but also, the facial changes in normal individuals, who are undergoing the normal aging processes.

To begin this article, it seems appropriate to provide some historic back-round to my interest and training in treating facial problems. I first became interested in this form of treatment after attending the 2nd International Workshop on Adverse Reactions and Lipodystrophy in HIV Conference held in Toronto in September of 2000. After seeing dramatic results and speaking with Patrick Amard MD, a french plastic surgeon who was engaged in its’ use, my interest began to peak.

As a physician engrossed in HIV treatment and often exploring new therapies, work has taken me to places outside the United States.Back in 2001, I discovered that this new treatment was also being utilized in a more geographically closer location: Tijuana, Mexico. Several years before the product was approved in the US, I traveled past the southern US border to investigate and become one of the first HIV specialists trained-in the use of a new treatment for facial wasting, called New-Fill which eventually underwent improved formulation to become Scultptra. I spent time with and trained under Jorge Tagle, MD, highly regarded plastic surgeon who holds an International Masters Degree in plastic surgery. His unique degree enables him to practice plastic surgery and teach new techniques in almost any country of Europe while maintaining a plastic surgery practice in Madrid, Spain and Tijuana, Mexico.

Sculptra: This similar product, New-Fill was approved for use in Europe in November 1999 and in Mexico during June of 2000. Use was also permitted in the US, prior to approval in patients with HIV disease.

Polylactic acid is a synthetic polymer polyester chemical; it is immunologically inactive, biocompatible and absorbable. This product has undergone many toxicology studies and considered safe. Demand for this treatment began to increase rapidly, probably due to its versatility in use for many applications. Also, the mechanism of action of Sculptra is to stimulate collagen production as a filling agent. Eventually and inevitably a US based pharmaceutical company, Sanofi-Aventis acquired the distributorship in the United States and reformulated and improved the product. In my opinion, it’s more user friendly, the granules are finer and seem to reconstitute better; additionally, each vial now contains more product than the original New-Fill formulation. It’s easy to understand why its’ use has spread, as a cosmetic application for healthy (non-HIV positive) individuals as well as in HIV-infection. The treatment often provides a more youthful appearance to the face and not uncommonly takes a few years off in individual’s appearance.

In my practice, each patient is examined for facial wasting, atrophy, wrinkles, excessive folds and any other abnormal or non-aesthetic changes. I begin by discussing with each individual, what they’ve observed on their own, as well as my own notes upon inspection. Often we have an open discussion. We proceed with a plan together and I continue by drawing on each area of the face in white pencil, in order to highlight what areas need to be focused on. The purpose of drawing on the surface of the face is to demarcate places where Sculptra is applied, emphasis in areas of deeper deficiency are made. Areas that needed filling are marked carefully with the anticipation of what that individual’s normal facial contour should be. I have an artful vision and I apply it to my practice. The face is divided up into several quadrants and each area is given special attention. If the pre-surgical drawings are not accurately performed, the final outcome of the treatment can be jeopardized.

The patient is then placed lying down in a comfortable position and have the patient hold a cold pack on their face for five minutes. This helps the anesthesia while causing vasoconstriction (blood vessel shrinking) so that bleeding is minimized. Following this step, I proceed with administering a nerve- block form of anesthesia and other smaller injections of lidocaine to the facial areas of each patient. Indeed I‘ve never had patients develop any problematic bleeding nor are patients uncomfortable during the procedure.

Finally, I begin administering the poly-lactic acid in three different planes using needle injections. At times, it is important to go deeper to the periosteum (above the bones of the face). A method called tunneling and fanning helps cover the entire areas of facial wasting in each individual, and reduces the number of injections. It’s important to note that each person’s face is not usually symmetric, often one side of the face needs different attention than the other.

Throughout the complete procedure there is little if any discomfort however, as in any surgical procedure, bruising, bleeding and infection are always possible side effects and adequate precautions are taken.

Patients require several sessions over several 2-3 months on average. It’s very important to note that the process has a layering effect. After each procedure, each product’s administration continues to build on itself. As each patient undergoes the next procedure they’ll notice that the effect is longer lasting and having greater impact. Moreover, the first session provides the foundation or base from which follow-up treatments are built on. Thus, and usually, the effect of the very first installation is not maintained for more than 1 week, although the product is there and the tissues begin reacting and forming collagen. With the second and third procedures, each improves the durability, as well as, overall effect. The procedures are performed approximately 4 weeks apart. The number of procedures that each individual requires is based on degree of deficient areas or level of atrophy that was present before treatment; in other words, more treatments may be required for more severe problems, but often very rewarding nevertheless. Also, each individuals aesthetic and goals tend to be different, so each has the ability to choose whether they want to pursue additional treatments for greater enhancement.

The treatment generally lasts two years but I often advise patients to have a “touch-up” periodically, perhaps once yearly to maintain the newer youthful and more healthy appearance.

There are many products that I’ve used and continue to utilize to maximize a patient’s ability to improve on their facial appearance. These include other facial fillers, Botox, laser related facial rejuvenation. Many attempts have been made to help HIV impacted individuals with their disfiguring side effects. It is not the purpose to this article to list or discuss alternative surgical therapies. While not all patients on HAART (antiviral cocktails) develop facial complications, for the significant numbers of persons with facial atrophy, a new treatment, albeit surgical based, can be applied.

Additionally, Sculptra has been a very effective treatment for correction of aging related changes, such as deepening naso-labial folds, crevices in various areas of the face, deepening temple areas and even eye-brow lifts. Often individuals experience atrophy of their cheek bones and notice increased wrinkles below their eyes; these are also areas that are very Sculptra friendly and amenable to correction.

Doctor Berger, MD of Chicago is the Medical Director of NorthStar Medical Center in Chicago, Illinois and Clinical Associate Professor of Medicine at the University of Illinois at Chicago. He is well-known throughout the US as a leading researcher of HIV-disease and has published extensively in many peer-reviewed journals, including the New England Journal of Medicine and the Lancet. He devotes his time and serves on numerous committees and boards of charitable organizations. For further inquiries Dr. Berger can be reached at (773) 296-2400.